Stay Up to Date > News > Explaining Cancer to Kids 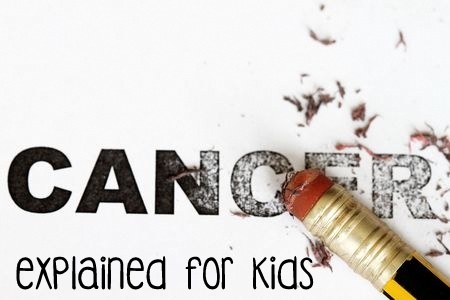 Cells are the building blocks of people and other living things. Cells are so tiny that you can only see them through a microscope. Cells make up your muscles, skin, stomach, and every other part of you. Your cells are part of you, and they are alive too. They need healthy food and oxygen so that they can grow and divide to make more you!

Cancer is actually a group of many related diseases that all have to do with cells. Cells are the very small units that make up all living things, including the human body. There are billions of cells in each person’s body.

Cancer happens when cells that are not normal grow and spread very fast. Normal body cells grow and divide and know to stop growing. Over time, they also die. Unlike these normal cells, cancer cells just continue to grow and divide out of control and don’t die when they’re supposed to.

Cancer cells usually group or clump together to form tumors. A growing tumor becomes a lump of cancer cells that can destroy the normal cells around the tumor and damage the body’s healthy tissues. This can make someone very sick.

Sometimes cancer cells break away from the original tumor and travel to other areas of the body, where they keep growing and can go on to form new tumors. This is how cancer spreads. The spread of a tumor to a new place in the body is called metastasis

Doctors aren’t sure why some people get cancer and others don’t. They do know that cancer is not contagious. You can’t catch it from someone else who has it — cancer isn’t caused by germs, like colds or the flu are. So don’t be afraid of people with cancer. You can talk to, play with, and hug someone with cancer.

You can’t get cancer from anything they do either. Some kids think that a bump on the head causes brain cancer or that bad people get cancer. This isn’t true! People don’t do anything wrong to get cancer. But some unhealthy habits, especially cigarette smoking or drinking too much alcohol every day, can make you a lot more likely to get cancer when you become an adult.

Finding Out About Cancer

It can take a while for a doctor to figure out someone has cancer. That’s because the symptoms cancer can cause — weight loss, fevers, swollen glands, or feeling overly tired or sick for a while — usually are not caused by cancer. When someone has these problems, it’s often caused by something less serious, like an infection. With medical testing, the doctor can figure out what’s causing the trouble.

If the doctor suspects cancer, he or she can do tests to figure out if that’s the problem. A doctor might order X-rays and blood tests and recommend the person go to see an oncologist. An oncologist is a doctor who takes care of and treats cancer patients. The oncologist will likely run other tests to find out if someone really has cancer. If so, tests can determine what kind of cancer it is and if it has spread to other parts of the body. Based on the results, the doctor will decide the best way to treat it.

One test that an oncologist (or a surgeon) may perform is a biopsy. During a biopsy, a piece of tissue is removed from a tumor or a place in the body where cancer is suspected, like the bone marrow. The sample that’s collected will be examined under a microscope for cancer cells.

The sooner cancer is found and treatment begins, the better someone’s chances are for a full recovery and cure.